Two weeks in Lebanon sounded like plenty of time. Maybe too much time. I was wrong. This tiny country the size of Connecticut boasted a density of attractions, from restaurants and wineries (my kind of attractions) to ruins and beaches. I covered far more of the former than the latter which means — I’ve got to go back. However, I did have time to survey the hotel scene and find three unique properties all serving different segments of the market, and deserve to be highlighted individually. If you want to read my report on the why Lebanon is the greatest food and wine country you’ve never visited, here’s Part 1 (history) and Part 2 (food and wine). Otherwise, dive right in to the hotel reviews. 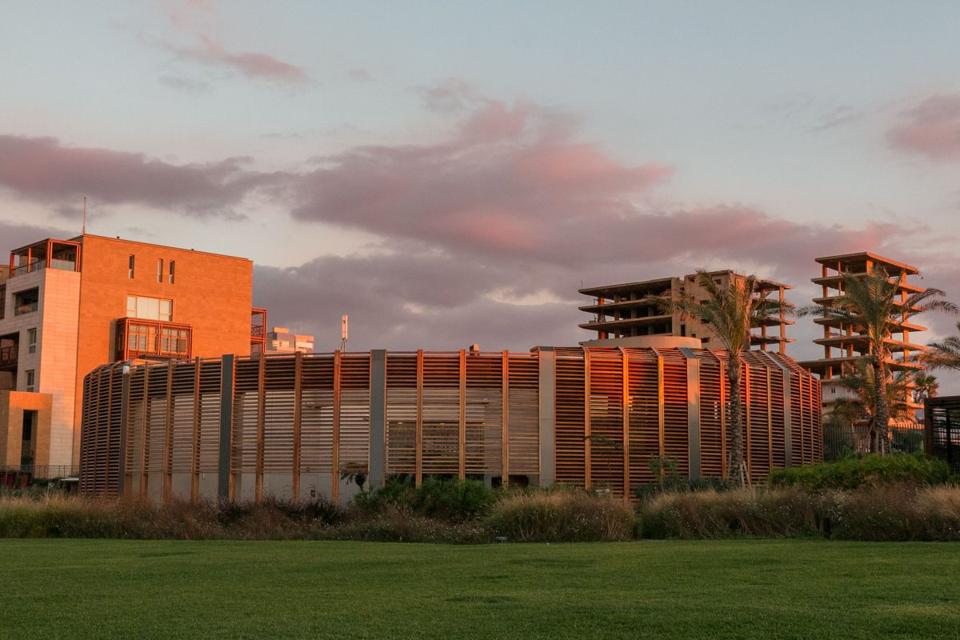 The gorgeous spa of the Kempinski Hotel.

A friend who saw my Kempinski shots posted on Instagram, commented: “I never thought of going to Beirut to hang out at a resort, but that place looks stunning.” And it did. As the sun dropped on my final night, the pool absorbed the lavender and apricot shades of the sky, while reflecting the slender silhouettes of palm trees. It looked like an exotic desert scene framed by the hotel’s blocky, baked-clay colored buildings. I thought, “even in off-season, the Summerland had considerable appeal.”

Unfortunately, October constituted the end of summer, even in this eastern Mediterranean gateway to the Middle East, where I had expected a longer season. Pool closed for renovations, chairs packed up, beach shuttered but for the empty strip of sand. Yet, the quiet proved a welcome respite from the frenetic energy of the streets just beyond the walls of the compound. 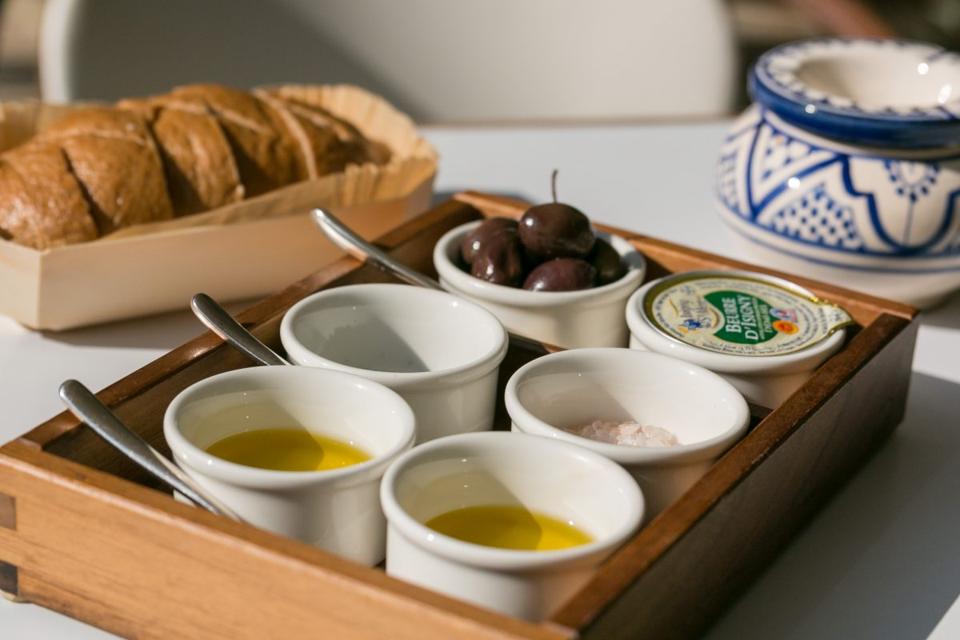 Yes, the Kempinski operated like a compound. At the gated entrance, security checks of driver, passenger, and car undercarriage were a reminder of Beirut’s past troubles and persistent fragility, but also an indication of the hotel’s high-profile clientele. On my first night, the city’s legendary traffic had seeped into the hotel driveway. Apparently, a dignitary from a neighboring country had arrived, and brought a legion of entourage and security detail with him.

The following day, with the sun perched high in the sky, I decided to hang around the hotel grounds and explore. Two well-equipped gyms with studio space, mats, weights, and regular fitness classes helped me work off some of the food that had defined my trip, and now my waistline. I also discovered a private outdoor pool hidden within the circular walls of the spa where I had booked a massage for the afternoon. I seized the chance for a swim, then grabbed a lounge chair to read awhile, relaxed by the soundtrack of crashing waves. 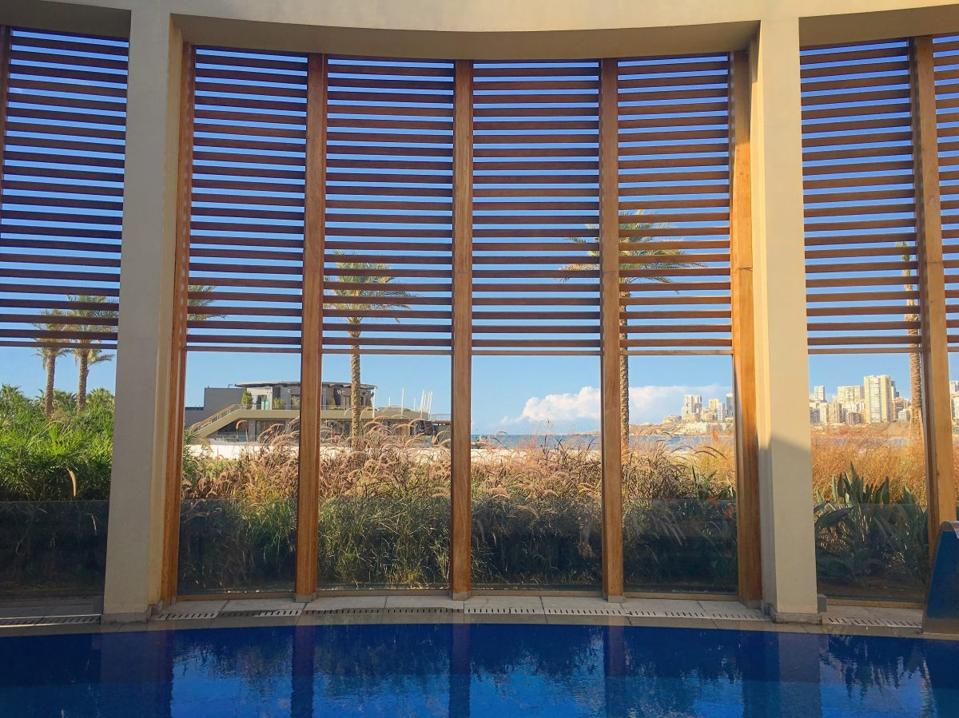 View from inside the Resense Spa.

Run by Rita Salem, the Resense Spa was one of the loveliest – and cleanest – I’d seen on my travels. Prior to my treatment, I visited the women’s bathing area, host to a small dipping pool and wet/dry facilities. My therapist heated a vial of oil and rubbed it on my scalp. A few minutes in the steam room helped it fuse to my hair; then we moved to a dimly lit room for a soothing aromatherapy massage. After, I lingered with a cup of tea in the relaxing room, wishing I’d booked 80 minutes instead of 50.

Back upstairs on my balcony, I spent another hour enjoying the late evening breeze; home in New York, the chill of winter had already settled in. All rooms, I was told, featured similar balconies, plus flat-screens and Nespresso machines. Upgraded rooms and suites added sitting areas, sea views, hot tubs or direct pool access, while 2-bedroom suites came with kitchenettes and 24-hour butler service. 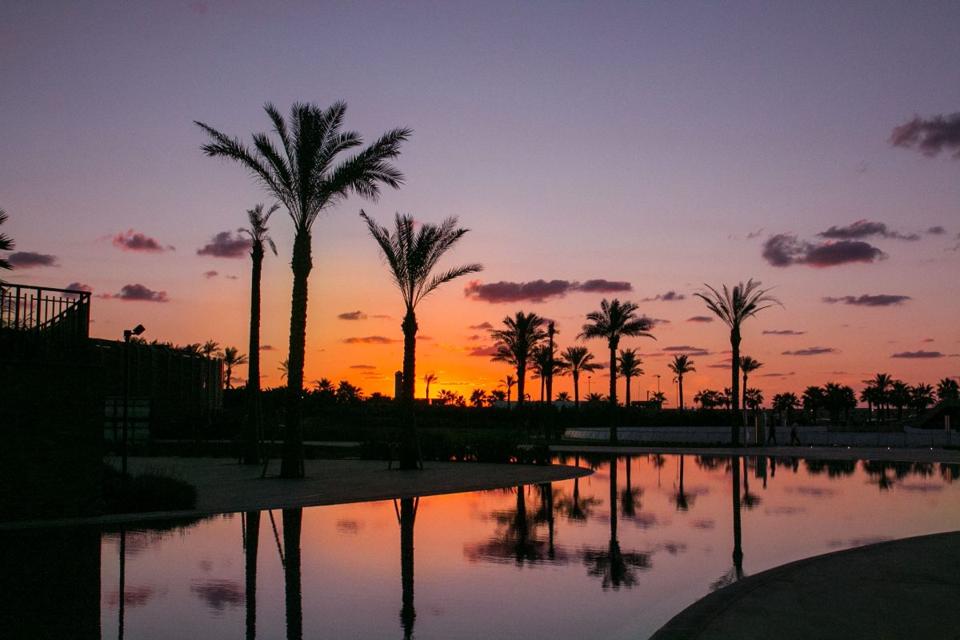 Ultimately, I didn’t need further luxuries as I didn’t spend much time in the room. My flight to Germany departed at 5 AM. With an array of security checks, I’d been advised to arrive at the airport around 2:30 AM. It was a lucky accident to book the Kempinski at the close of my trip — one asset of the hotel for such travel logistics was its proximity to the airport, a mere ten-minute drive.

Advising the front desk to ring me at 1:45 AM, I went down for dinner at oceanfront Pier 78. A single patron dined next to me. At 7 PM, we were the only people in the expansive room. I’d learn we shared the goal of early bedtime, as she, too, was booked on the early Lufthansa flight. 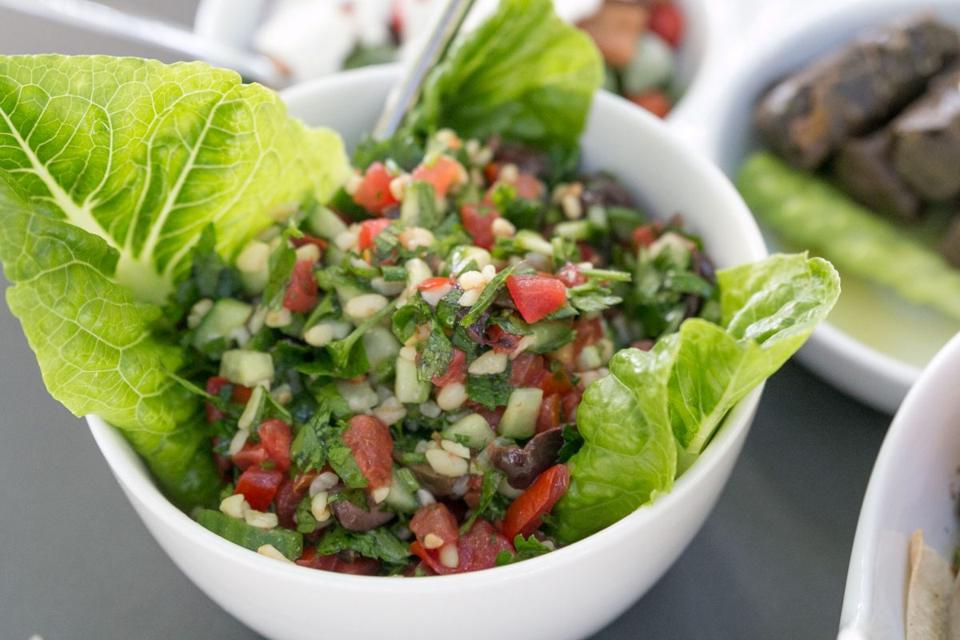 Lebanon, the land of fresh salads.

Imagining I’d dine light on my final night, so I picked out a few vegetarian mezzes. The waiter had different designs. “We’re a seafood restaurant. Why don’t you take the special menu,” he urged. I acquiesced only to receive three rounds of food suitable for a party of eight. The nearly dozen cold mezzes were a (welcome) highlight reel of Lebanese dips and salads, plus a few in-house specialties like grouper in olive oil and chilled shrimp. The hot round, another 8 or 9 dishes, featured fish, octopus, and other warm shellfish salads. I’d saved enough stomach share to dig into the third course, fried local fish and bottomed out by the dessert course. At least I had control over my alcohol intake, selecting one glass of Lebanese wine – a red blend from Atibaia – to pair. It was a delicious repast that proved a fitting end to two weeks of eating and drinking across Lebanon. Especially apropos given the 120-year-old hotel brand had been founded by a passionate wine and food merchant, Berthold Kempinski.